From Gigi Hadid and Nicki Minaj to Versace and Marc Jacobs: A Running List of Paparazzi Copyright Suits

image via complaint
With the general rise in social media usage and the decline in conventional advertising formats has come a surge in Instagram-centric ad efforts. This push to meet consumers where they are, i.e., on Instagram, and other social media platforms, has meant that the jobs of influential figures – whether it be fashion bloggers, editors and runway models or reality television stars and more traditional Hollywood celebrities – have expanded to include building and maintaining sizable social media followings in order to leverage those followings for big-money advertising partnerships.
IMG Models’ Luiz Mattos, the power agent behind the likes of supermodels Gigi and Bella Hadid, actress Priyanka Chopra, and longtime Victoria’s Secret angel Alessandra Ambrosio, put it best when he told Vogue Business that “these days, models’ jobs don’t end when they leave the studio or the runway … Your job is not only to be in front of the camera. When you finish shooting a campaign and you’re posting on social, you need to have something to say.”
The same goes for fashion editors and fashion brands that are expected to maintain carefully curated social media accounts, as well as brands. And then there are the social media influencers and mega-stars like Kylie Jenner, who earn a significant portion of their income based on social media ads. 21-year old Jenner, for instance, earns a recently-reported $1.2 million per sponsored social media post, according to Instagram analytics company Hopper HQ, in connection with her regularly updated account.
One of the glaring side effects of such increased attention to Instagram is the growing number of copyright infringement lawsuits that are being filed against individuals and brands over their unauthorized use of others’ images either of themselves, in the case celebrities and models, or of others in their wares when it comes to brands. Regardless of who appears in a photo, the individual(s) behind the creation of a photo, almost exclusively paparazzi photographers (or their employers) in these instances, are the copyright holders, and as a result, any use of images by individuals other than the copyright holder gives rise to copyright infringement claims.
Here is a list of summaries of some of the recently-filed paparazzi v. celebrity and paparazzi v. brand cases:
AUGUST 2019 – Barbera v. Alexander Wang, Inc., 1:19-cv-07540 (SDNY) 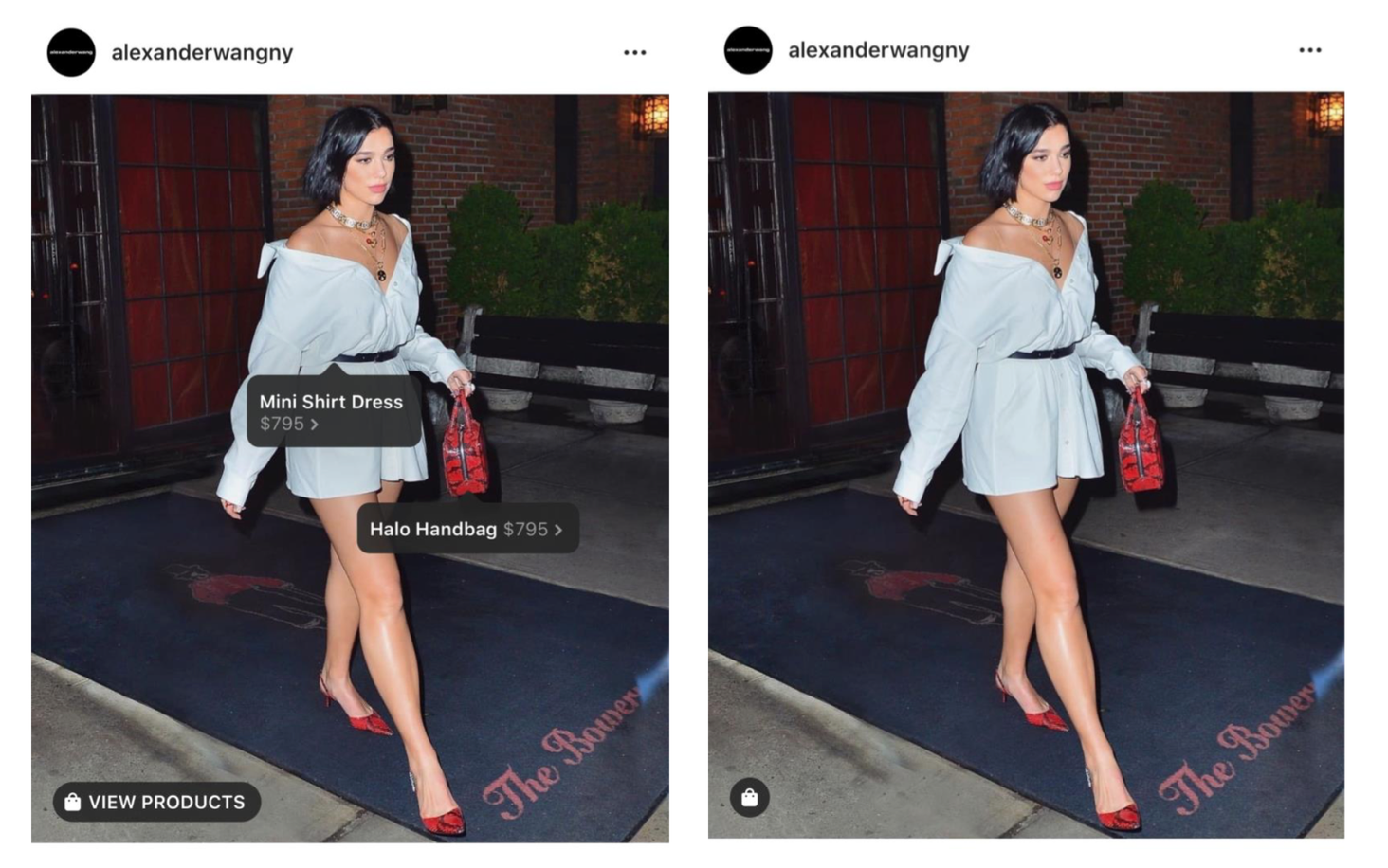 images via complaint
Photographer Robert Barbera is taking on Alexander Wang in a copyright lawsuit after the designer allegedly posted a photo of Dua Lipa wearing to his Instagram without licensing it or obtaining the photographer’s authorization. According to the complaint, which was filed in a New York federal court, Barbera claims that he “photographed English singer and songwriter Dua Lipa” when she was leaving the Bowery Hotel in New York in early April 2019.
While Barbera licensed the photo to other companies to use, “Alexander Wang ran the photograph on [its Instagram and Facebook accounts"] to promote its clothing” without paying to license the photo. In particular, Wang made use of the image of the singer wearing its $795 Mini Shirt Dress and $795 Halo Bag to implement stoppable links on its Instagram page to enable consumers to easily identify and shop the products, noting that the dress and bag were “now available” for purchase.
Barbera is seeking injunctive relief and monetary damages in connection with Wang’s alleged infringement.
JULY 2019 – Vila v. Monse LLC, 1:19-cv-07078 (SDNY) 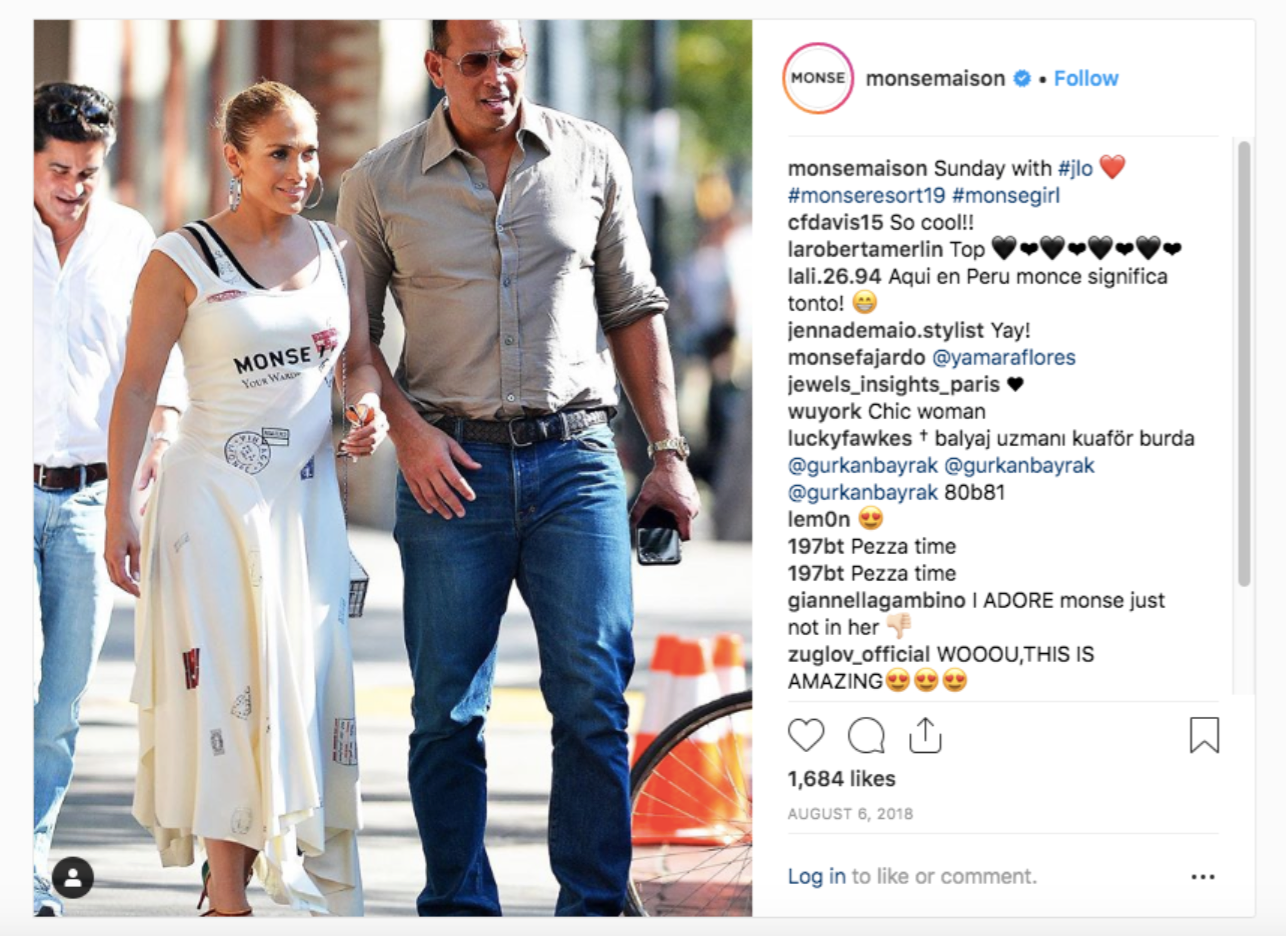 image via complaint
Monse is in trouble for posting a photo of Jennifer Lopez and Alex Rodriguez to its Instagram account without licensing it from the copyright-holder photographer who took it. That is what Carlos Vila asserts in the lawsuit he filed against the New York-based brand in a Manhattan federal court. According to Vila, Monse – which was launched to much fashion industry fury in 2016 by now-Oscar de la Renta creative directors Laura Kim and Fernando Garcia – “is not, and has never been, licensed or otherwise authorized to reproduce, publicly display, distribute and/or use the photograph.” Although, the photo at issue did appear to have been licensed to Vogue to use on its site.
More than that, the brand was not legally allowed to “falsify, remove and/or alter” the copyright management information, which identified Vila “as the photographer of the photograph.”
JULY 2019 – Splash News and Picture Agency, LLC v. Nicki Minaj, 2:19-cv-05822 (C.D.Cal.)
In July, Splash News filed suit against “rapper, singer, songwriter, actress, businesswoman, and entrepreneur” professionally known as Nicki Minaj” for allegedly “copying” seven different photos – including ones depicting her “in a multi-colored Oscar De La Renta gown outside of the Harper’s Bazaar Party in New York City,” “in a plaid Burberry outfit in New York City,” “at a NYFW party in New York,” and in “a cheetah print outfit” – which appear to have been licensed to and taken from the Daily Mail – and “distributed them” for display to her 91 million Instagram followers.
The well-known photo agency claims that the photos at issue “are creative, distinctive, and valuable,” and because of Minaj’s “celebrity status, [as well as] the photographs’ quality and visual appeal,” Splash News and the photographer it represents “stood to gain revenue from licensing” them. However, Minaj’s unauthorized use of the photos “made them immediately available to [her] 91 million followers and others, consumers of entertainment news … who would otherwise be interested in viewing licensed versions of the photographs in the magazines and newspapers that are [Splash News’] customers.” As a result, Minaj directly impaired “the existing and future market for the original photos.”
JULY 2019 – Vila v. Alison Lou LLC, 1:19-cv-06634 (SDNY) 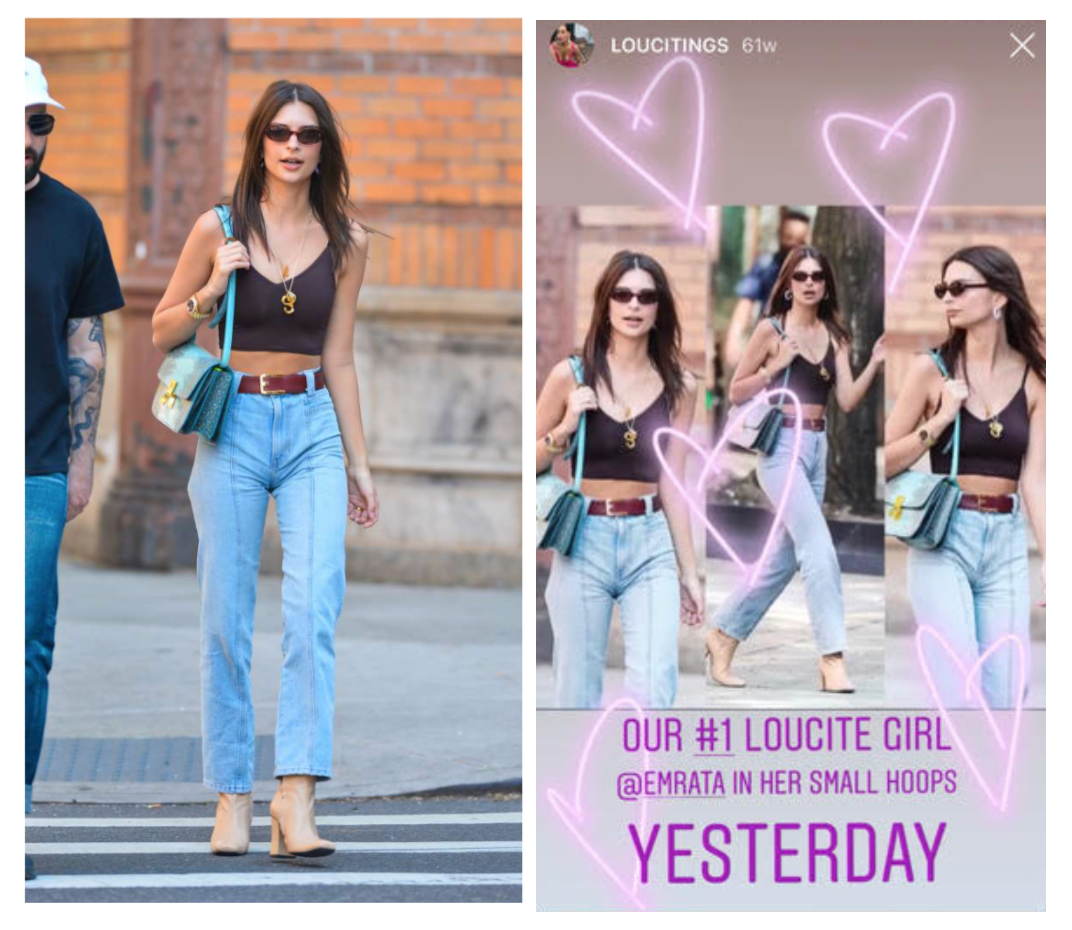 images via complaint
Carlos Vila, a professional photographer, sued celebrity-favored jewelry company Alison Loufor copyright infringement. According to Vila’s complaint, which was filed in a New York federal court in July, Alison Lou – whose Instagram includes a running series of stories called page “Loucitings,” in which it documents sighting of celebrities and influencers wearing its jewelry – postedaphotograph he took featuringmodel Emily Ratajkowski in a pair of its earrings.
“Alison Lou did not license the photographs from [Mr. Vila] for its Instagram Story, nor did Alison Lou have [his] permission or consent to publish the photographs on its Instagram Story,” the complaint asserts.
JULY 2019 – Barbera v. Christian Siriano Holdings LLC, 1:19-cv-06155 (SDNY)
A photo of Lady Gaga from May 2018 has landed Christian Siriano in hot water. The musician-slash-Oscar winner stepped out in New York City in a striking crimson frock from the designer’s Fall/Winter 2018 collection to much media fanfare and paparazzi attention. One of the photographers who captured an image of Gaga, Robert Barbera, who asserts in his lawsuit that Christian Siriano posted the image on its Instagram without licensing the photo or otherwise seeking and receiving his authorization to do so.